I have recently committed to the purchase of a 1963 mahogany lapstrake on white oak Nordic Folkboat. The decks and cabin top on this boat are constructed of exterior fir plywood which was coated in epoxy resin in which one layer of (fiberglass?) cloth was imbedded the finish coat is some type of paint product. When originally built the cabin walls extended to the front face of the deck hatch. This design caused water to become trapped in the area of the on-deck mast step. In 1979 remedial work was required in this area. Work included a few new deck beams a new mast step and a modern aluminum framed hatch. I am not certain if the deck repair included any new cloth. The transom was also replaced at the time of the deck repairs. Since the boat is a thousand miles from here I have not been able to inspect it myself but have hired a surveyor who has extensive knowledge of wooden boats. The just completed survey of this boat has reveled the following problems needing attention:

1) Five ribs are cracked (across the grain) at the area of greatest bend near the bilge. The current owner (the owner for the last twenty years) had not known of the broken ribs. The damage apparently looks to have existed for several years and has caused no damage to the adjacent planks. 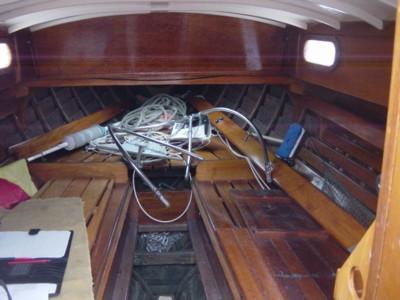 2) Two or three minor leaks including one on the deck and I believe there are two in the cabin. There is one that has been reported at a port light and there is one visible in a jpeg near a beam end as described below.

3) Two cabin roof beams are cracked ( one completely through) the other for about half of the depth of the beam. These beams are steamed white oak and approximately 1″ 1.5″ . The actual size might be slightly different. A jpeg of these beams shows indication of deterioration at the intersection with the cabin sides. A small rivulet of infiltrating rain water can be seen entering the interior of the cabin at this intersection and the most seriously damaged beam. Jpegs of the cabin roof show a slight depression in the general area of the cabin edge where the cabin side trim meets the roof. In this same area there appears to be a hollowed out section in the carlin, possibly where rot was removed to the point where solid wood was encountered. This area has since been varnished, perhaps several times.

In the case of the cabin at least, I suspect that there is some rot hidden from view . Without tearing the cabin apart there is no way of knowing for sure the extent of potential hidden damage to the beam ends, the cabin sides or elsewhere. As for the deck, no rot is visible, but again, there has been a history of previous rot, and there is the possibility that is was not all found and subsequently dealt with at the time of the deck repairs. 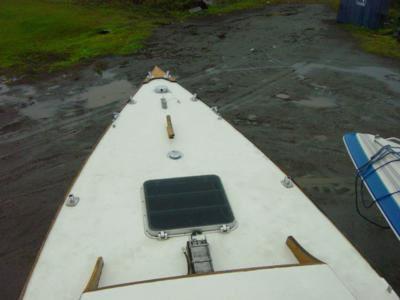 There was no rot detected in any of the ribs, floors, or planks. At least none was visible and soundings with a phenolic hammer indicated that those member are all solid.

My surveyor has indicated that given the relative low level of structural seriousness of the problems described above, and warns of the extensive work required to disassemble the cabin to find and replace deteriorated members.

He suggested that I consider a penetrating epoxy system for the required repair. Here is his comment on the cabin rafters:

“I think you are worrying too much about those rafters. They appear to be no big deal from my perspective. My letter will indicate a method of repair. There is a marvelous new penetrating epoxy system that is a very effective at eliminating rot. the cabin cannot come apart without major surgery. If there is rot, just harden it up. I have done temporary repairs of this sort years ago and they are just as sound now as new. Again, I know what you are seeing, but those rafters are no big deal.”

He has previously suggested that due to the location of the rib damage (below the level of the tops of the floors), because of the relatively few ribs involved, (5 of 54) and given the inherent strength of the lapstrake method of hull construction that these broken ribs pose no immediate serious concern. He has suggested scarfing new steamed sections in when time and money allows.

I am curious to see if it is your product he recommends. As a matter of fact I just yesterday bookmarked your site, although I have visited a few times over the past year of so.

I have no way of being sure that he is referring to our products. I certainly consider CPES to be a marvelous product. It has been in production since 1979, so I would not consider it new, although it may be new to the surveyor.

I am interested in hearing your suggestions as to which of your products you would suggest and specific repair methods and or treatment you recommend for a) the cabin roof, b) the deck, and c) the cabin rafters and adjacent wood d) the broken ribs.

The products and techniques are basically the same for all repairs. CPES applied first to dried wood, followed by Layup & Laminating Epoxy Resin and/or Fill-It Filler epoxy putty to fill in any missing wood or cracks. There are specific techniques for areas where you don’t have good access to the damaged area. Your situation doesn’t appear to need any of these techniques. The most you will have to do is drill through the fiberglass to get to the rotted area. Drying the rotted wood out is the most difficult problem here, since you are not exposing enough surface area for the wood to dry quickly on its own.

From what I have read on your site, it would seem to me that unless I am prepared to remove all current deck and roof covering down to the wood, there isn’t much chance of affecting a watertight, and durable repair to the deck and or cabin roof. Perhaps I am misinterpreting what I have read. If so please correct me. If there is a way of doing a “proper job” or the repair without totally removing the finished decking and roof using your products or others, I would be pleased to hear of it. Removing that material would be a very labor intensive and potentially expensive job. It seems to me that if I need to remove the existing epoxy, and cloth, I might as well remove any deteriorated plywood and then install new framing as required. As for the interior or the cabin and the ribs, things sound a little more promising.

By using either method you are saving yourself considerable work versus cutting all the damage away and replacing with new material. Cutting scarf joints is a pain, especially in thin plywood. You don’t want to make butt joints, especially on curved cabin tops. At best it will be a cosmetic eyesore, with the seam showing. At worst it will be a source of future leaks as the seam works and opens up. The only way to make a proper butt joint is to have an overlapping backing plate which would look awful, especially on such a pretty boat as this.

I have included some pictures for your perusal, including of the broken cabin beams, one of the deck, one of the cabin roof and a second interior shot of the cabin that gives a fair idea of the general condition of this area of the boat. I do have a few other pictures I could send but these should give you a pretty good idea of the specific areas of concern. I don’t unfortunately have a close up of the rib damage. Thanks for any guidance you can give me regarding these repairs and the use of the products within your line that would be most suitable for this project. I look forward to receiving your recommendations.

For the cabin top frames, I would do this. Chisel out two cavities from the side, one near the top, the other nearer the bottom. Chisel down a little past center. Make the cavities parallel to the cabin top, maybe 6–8″ long, right over the crack so that 3–4″ extends over both sides of the crack. Get yourself some threaded stainless steel rod. Cut off pieces long enough to fill each cavity. Prime the crack and chiseled cavities with CPES. When this has a chance to cure for 24 hours, make a slurry of All Wood Glue and chopped fiberglass fibers or fine sawdust, thick enough to give the mixture some body, but not so thick that it won’t still settle into smaller cavities.

Run a piece of duct tape down the far side of the beam, under, and up to the lowest chiseled cavity. Use an empty caulking tube or clean mustard squeeze bottle to fill the crack below the cavities, and part of the cavities with some of the epoxy/thickener mix. Push the threaded rods into the epoxy filled cavities, and back fill with more epoxy slurry. Quickly put more tape over the cavities so that the epoxy doesn’t ooze out. After this has a chance to set, I would drill a smaller hole near the top of the crack and use a clean mustard squeeze bottle to force some plain All Wood Glue (no thickener) into the drill hole, thereby filling up the rest of the crack. Some more duct tape would be useful to keep the epoxy in while it cures. Once everything is cured, I would peel the tape away, do any final filling with Fill-It Filler, then sand and paint. You have an invisible structural repair. The same thing can be done for the ribs if you like, however I feel that your surveyor is correct in that it is not a major structural issue.

Scarf joints can be cut, but for best structural strength must be made at about 12:1 ratio. This is a shallow angle to cut, and it is often less work to glue in the threaded rod as indicated above. All Wood Glue would be recommended for gluing in the replacement wood.

As far as I can tell from your description and the photos, the surveyor is correct. Overall it seems to be in really nice shape. As the main structure of the boat is pretty easy to access, it would take a very incompetent surveyor to miss any major damage. Everything noted can be repaired using epoxies, especially when our penetrating epoxy is used properly. Done properly you will have a very nice boat which will survey out solid and be a joy to own.